Orthodox Ethos
and the
Question of Church Hierarchy

I am but a humble layman. I don't pretend to be an authority on Church history, theology, or the canons. However, I can recognize the makings of conflict. Observing the online communications of Fr. Peter Heers and members of his organization, "Orthodox Ethos", points to a growing dispute between themselves and the present hierarchy regarding the ecclesiology of the Orthodox Church.

On November 10th, 2022, Fr. Peter Heers, a priest claiming the support of the Vicar Bishop Luke of ROCOR's Eastern American Diocese, and posting online using the Twitter account "Orthodox Ethos" [L] [A] , publicly called for another ROCOR priest within the Midwest Diocese to disregard his bishop when it came to matters of how the sacrament of baptism is to be administered. Rather than listen to one's bishop, priests should instead "follow the saints".

Disregarding the bishops is justified by looking at "a holy man of God" and observing that he maintained a state of grace while performing actions contrary to those currently advised by the ruling hierarchy.

This line of argumentation was later picked up by John Coffman, the assistant general manager of Uncut Mountain Press (Fr. Peter Heers' publishing house) and managing editor of Orthodox Ethos [L] [A] , with elevated language. The bishops of today are claimed to be "corrupt"; we have no choice but to follow the saints.

Apostolic Succession itself is even brought into question. The way by which all Orthodox clergy trace their authority and grace is declared to be corrupted. Such a view would suggest something similar if not the same as the Protestant idea of "The Great Apostasy" that claims that at some point, the institutional Church lost the faith of the Apostles.

Not only then are bishops subverted by a false succession brought about by a tainted faith, but even entire jurisdictions. The only way to guarantee salvation is by "following the saints".

Which saints are we to follow? The saints themselves are presented as not all being equal. Early saints who had much to say regarding the role of bishops can be superseded by those after. The Orthodox theological understanding of the ecclesiology of the church can developed and changed upon the teaching of later saints.

[Addendum 2022-11-18 19:48] This belief in how the saints are to be understood has been brought up in past discussions and apparently relates to a graduate level seminary course that John Coffman helps administer. It is uncertain at what institution such an ecclesiology is taught or whether it is associated with Fr. Heers and Orthodox Ethos.

It is stated that no formal condemnation is needed before labeling an apparently corrupt ecclesiastical structure as heretical. As opposed to being beholden to this apparent heresy, we are to rather confess the true "Body of Christ".

When questioned as to what authority the above claims can be made under, an answer is provided that suggests the authority comes from the individual making them rather than the blessing of any ecclesial authority. As Christ attested to Himself when challenged, Fr. Heers is stated to be able to witness in a similar manner.

While all of these public comments were made on Twitter, it is worth noting that Orthodox Ethos performs a majority of its public engagement through YouTube. Their channel, also named "Orthodox Ethos" frequently achieves thousands of views per video; some even receiving tens of thousands of views. It is likely that this ecclesiastical view is further developed and promoted throughout these videos.

[Addendum 2022-11-15 12:31] A reader of this article notified me to older posts made on a Facebook clergy group around 2020 that demonstrate a similar pattern as displayed on Twitter; all the commentators in these screenshots are ordained Orthodox clergy. Unfortunately, I do not have direct links or archives available. 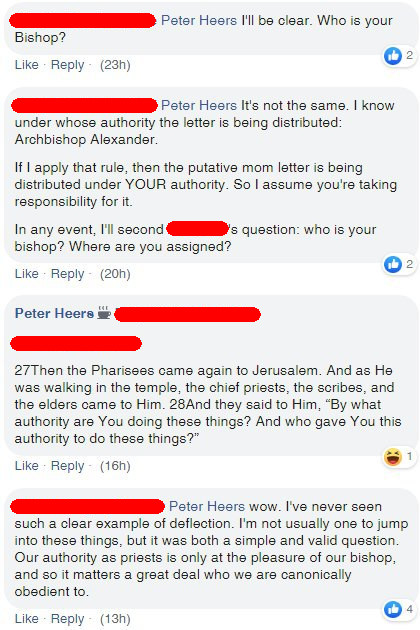 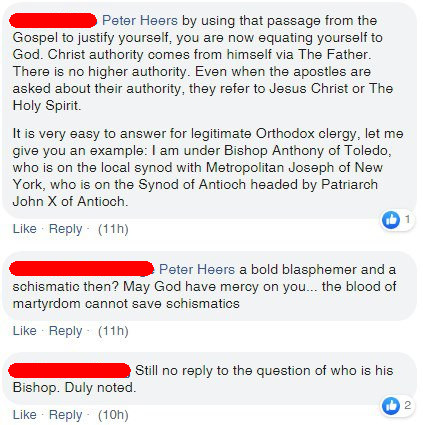